Most destination wedding photographers absolutely love traveling. Honestly, I’m not one of them. Don’t get me wrong, I really do enjoy being in new, unique places and drinking local beers with fresh faces, but the “process” of traveling I completely suck at. What I mean is I’m guaranteed to forget at least 2 or maybe 3 important things. And when I’m not forgetting stuff I’m struggling to make healthy food choices, drink responsibly and generally be a human being not spinning slowly out of control. Thankfully, I was able to maintain myself at a somewhat respectable level for a barn wedding at Spreafico Farms before heading up north to San Francisco for Spencer & Kristy’s engagement session. Oh and for a quick side note, I’m currently writing this on an airplane en route to a wedding in North Carolina and most likely flying somewhere over a state that voted for dumb-ass Trump. I know I haven’t been the most consistent so far on what this blog post is all about so to clear up any possible confusion let me just state this post is regarding Spencer and Kristy’s Sutro Baths engagement photos in lovely (and expensive) San Francisco. Now that we’ve got that all squared away let me get into the details of this Sutro Baths engagement session at Land’s End in San Francisco!

So Kristy and Spencer are getting married at Vitagliano Vineyards in Temecula, California next year, but Kristy is currently living in San Francisco while finishing up school. Since I was already going to be somewhat up in Northern California in September we just decided to arrange our schedules to make the engagement session happen then. And honestly, I’m beyond stoked we did because the day of the engagement session in San Francisco was perfect. The weather was in the low 80s, Kristy & Spencer dressed for success and we were all literally walking on sunshine with perfect weather. Since I am not too familiar with the area I can’t give too many of the details or specifics other than the location was some spot called Sutro Baths located at some other spot called Land’s End, but I will say the area we were taking photos had a lot of diversity. Gorgeous trees, unique pathways and a beach that happened to produce amazingly colorful skies. The setting in San Francisco was certainly rad but the company was even better. That’s because Spencer and Kristy were completely relaxed, fun and were just good people. I mean they were genuinely awesome peoples and I hope my photos captured some of that energy because it really was a great day. So check out the San Francisco engagement photos and let me know what you think! Cheers!

How long is the Lands End Trail in San Francisco?

The ruins of Sutro Baths are located in the area of San Francisco known as Lands End. The entire Lands End Trail is a little over 3 miles long so if you are going to take a couple on that type of an adventure for their engagement photos it is important they dress properly. That means be mindful of wearing fancy heels, especially, if you plan on rocking part of the engagement session at the Sutro Baths ruins and on the beach. Also, be mindful that Lands End Trail is a location that is very popular in San Francisco so be prepared to deal with crowds.

Do you need a Permit for Photography at Sutro Baths San Francisco?

According to the National Park Service website responsible for the Golden Gate National Recreation Area, which includes Muir Woods National Monument, Fort Point National Historic Site, Crissy Field, the Marin Headlands, Ocean Beach, and Sutro Baths, engagement photographers need to submit an application for a special use permit commercial filming/still photography. This would need to be completed before the Sutro Baths engagement photos shoot. The cost for a Sutro Baths photo permit would be $60 as of January 1st, 2020.

For more information on getting a photography permit for your Sutro Baths engagement photos please click here. 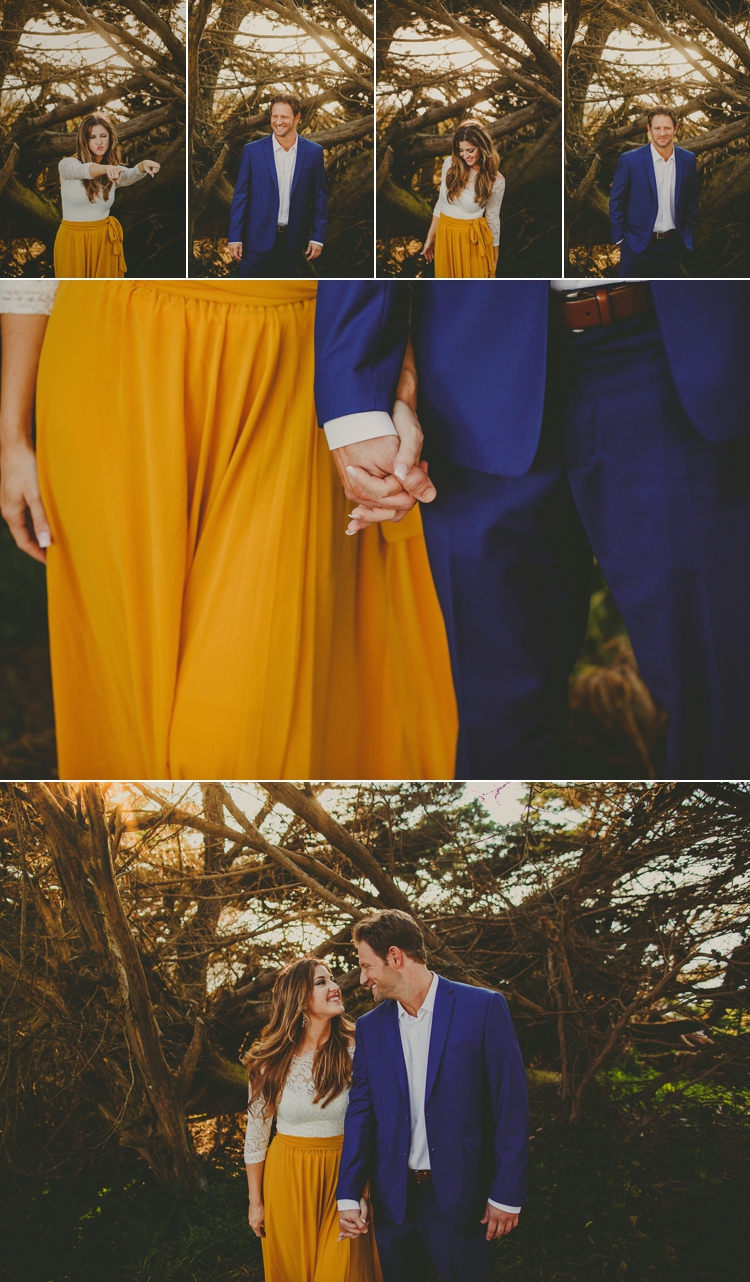 My Favorite Moment From The Engagement Session

Simply hanging out with these two was a good day, but my favorite moment was probably at the end of the Sutro Baths engagement session when we got blasted by the cold ocean water. Those unexpected events always produce the most candid and authentic moments that are just so rad to capture on camera. The only downside was the 4-hour drive back to my hotel in wet socks and shoes, but it was totally worth it for those few photographs.

During Kristy and Spencer’s Sutro Baths engagement photos we all found ourselves asking so many questions about the unique location on Ocean Beach in San Francisco. If you are as inquisitive as we were, hopefully, these Sutro Baths FAQs might provide a little history on the stunning location!

Why Did Sutro Baths Close?

For those who are wondering what happened to the Sutro Baths, the location closed in 1966, burning down later that same year in what some San Francisco locals believe were highly suspicious circumstances. The reason is that the area where the Sutro Baths ruin stands today was supposed to be the setting of high-rise luxury condos with ocean views. However, after the very convenient fire burned Sutro Baths to the ground the city abandoned the plan, leaving many San Franciscans with more questions than answers. The fire that burned the Sutro Baths was filmed on an 8mm camera. Those who want to view the original footage of the Sutro Baths fire, as well as some really cool historical photos/stories at Sutro Baths, can check out this YouTube video.

Can You Swim In The Sutro Baths?

So after your Sutro baths engagement photos, or maybe San Francisco elopement, you are feeling a little adventurous and thinking about jumping into one of the Sutro Baths for a little swim? Well, don’t! First of all, it might not be illegal to swim in the Sutro Baths but it surely is disgusting and a horrible idea. Rusted rebar, bacteria, parasites, broken glass, trash, and probably hypodermic needles could all potentially be in that nasty water. Instead of swimming in the Sutro Baths after your engagement session I would encourage couples to grab a cocktail at Sutro’s at The Cliff House. Cliff House is a really awesome two-story restaurant that offers gorgeous panoramic Ocean Beach views. So grab a cocktail at The Cliff House and observe the Sutro Bath ruins, Pacific Ocean,  and the entry to the Golden Gate!

Oh, and earlier when I mentioned when I travel I tend to forget at least 2 or 3 important things? Well during this trip up to San Francisco I forgot my toothbrush (but somehow remembered my toothpaste), enough underwear (2 for 3 days is bad math) and lastly my evening relax time lavender scented candle. I’m just kidding about the last part. I use the old Irish remedy for a good night’s sleep: booze.

Those interested in checking out more Northern California weddings or engagement sessions can check out Crystal and Keith’s wedding photos at Sand Rock Farm.

Where Are The Sutro Baths